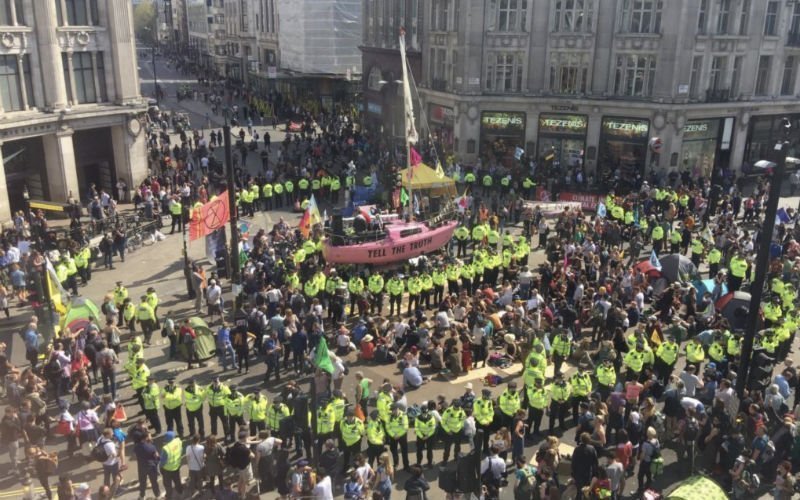 I had never heard of Extinction Rebellion (XR), until I read an article in The Guardian in mid-April 2019, by George Monbiot:

“Today, Extinction Rebellion takes to streets around the world in defence of our life support systems. Through daring, disruptive, non-violent action, it forces our environmental predicament onto the political agenda. Who are these people? Another “they”, who might rescue us from our follies? The success of this mobilisation depends on us. It will reach the critical threshold only if enough of us cast aside denial and despair, and join this exuberant, proliferating movement. The time for excuses is over. The struggle to overthrow our life-denying system has begun.”

That week, I followed the coverage of the protests via social media and was so moved that by Thursday I turned to Rachel and said, “We are free this weekend, shall we go to London and get arrested?”
Without hesitation Rachel said “Let’s do it.”

So we did, and pretty quickly too.

On the Friday we took the coach to London and joined a basic training session that gave us more information about the three main demands of XR and how we could get involved:

1 / Tell the Truth (Declare a climate and ecological emergency.)

2 / Act Now (The government must act to halt biodiversity loss and reduce greenhouse gas emissions to net zero by 2025.)

3 / The government must create and be led by the decisions of a Citizens’ Assembly on climate and ecological justice.

This is the explanation of the civil resistance model as written by Roger Hallam in the XR Handbook, This Is Not A Drill.

“1/ First, you need the numbers. Not millions, but not a few dozen people either. You need several thousand; ideally 50,000.

2/ You have to go to the capital city. That is where the government is, that’s where the elites hang out and it’s also where the national and international media are usually based…

3/ You have to break the law. This is the essence of the non-violent method because it creates the social tension and the public drama which are vital to create change. Everyone loves an underdog narrative. It’s the great archetypal story in all cultures; against all the odds, the brave go into battle against evil. Breaking the rules gets you attention and shows the public and the elite that you are serious and unafraid. It creates the necessary material disruption and economic cost which forces the elites to sit up and take notice. Common actions are simple ones: sitting down in roads; painting government buildings.

4/ It has to stay non-violent … people need to be trained to stay calm… non-violent discipline is rule number one for all participants.

5/ It has to go on day after day… To create real economic cost for the bosses you have to keep at it. The first day or two, no one is bothered. After a few days it becomes an ‘issue’. After a week it’s a ‘national crisis.’

6/ Last but not least, it has to be fun. If we can’t dance at it, it isn’t a real revolution. The artistic communities need to be on board; it’s a festival. We are going to show the media that we’re not sitting around waiting to die any longer. We’re gonna have a party. Obviously.”[i]

Non-violent civil disobedience in the current situation seems not only to be an appropriate response but a duty for any concerned citizen. After all, who else is going to do it?

A rest at Oxford Circus

Saturday morning 20th April, having decided we were ‘arrestable’, we went to sit in Oxford Circus. The day before, the police had removed the iconic pink boat which had been blocking the road, but many people were continuing to occupy the street with signs saying “We are the Boat”.

Before long, the police came to make arrests. Just as we had been informed, they gave us a two-minute warning and then, after invoking section 14, ‘obstruction of a public highway’, they carried our limp bodies to the vans.

My heart raced and I felt nervous as the police stood over me, but once they picked me up and placed me under arrest there was no going back and I found myself feeling calm and satisfied that I had gone through with it. So many of us were getting arrested that day that the police were really stretched. We waited in the cage in the back of the van for over an hour, before they knew where they could take us.

Having been arrested at about 1ish, I then spent the day getting processed and doing yoga in the cell. By about 8pm a solicitor from Bindman’s was available to give me advice. She was really supportive and encouraging and once again, I felt moved to tears that nearly a thousand people had now been arrested, pushing the climate crisis into the news and up the political agenda. (The following week XR were invited to meet senior politicians from all major parties, including the Secretary of State for Environment, Food and Rural affairs. The next day, the UK became the first country to declare a state of climate and ecological emergency.)

I was told it was unlikely we would be prosecuted and that, under the circumstances, doing a no comment interview was best. Getting released, I naively thought that was already the end of it and I felt elated.

A Week of Reflection

The following week I felt really adrenalized, (not in a good way), and processing the experience took time, even with the support and love from Rachel, who had been through the same thing. It is not easy to sit with the feelings that arise when facing up to the reality of the climate crisis; loss, fear and grief to name just a few.

In some ways, we are all implicated. We are enmeshed within a system that is not only unsustainable, but is currently causing the 6th mass extinction.

“Topsoil is now being lost ten to forty times faster than it can be replenished by nature, and 30 per cent of the world’s arable land has become unproductive due to soil erosion since the mid-twentieth century. The world’s insect population has fallen by 60 per cent since the 1970’s. Large parts of Europe look green but are ‘biodiversity deserts’ – the birds and bees are dying.” Farhana Yamin, Environmental Lawyer.[ii]

Writing these words, I realise how off-putting and prophetic it sounds; and yet the science is startlingly clear. We need to act now. Rachel and I have been researching our carbon footprint, (that in itself can feel like being lost in a maze), looking at our lifestyle and thinking about the most impactful changes we can make. There are many.

For me, one of the hardest things has been questioning if it’s any longer within the domain of ‘right livelihood’ to be teaching foreign retreats. These past seven years I have been teaching in Goa every season and dozens of students fly from all over the world. It has been a privilege and an honour to hold the space in such a setting. On retreats participants get to drop their normal day-to-day narrative and roles; this undoubtedly has an amazingly freeing and expanding psychological effect. But is the exotic setting essential? Probably not, but I am so strongly attached to India and, as yet, cannot imagine giving this up entirely.

Confronting the reality of climate change does not all feel like doom and gloom. Becoming active through XR has been an empowering process and I like being amongst people who are being proactive to try and create system change. Having a collective sense of purpose and meaning, working toward creating a regenerative culture as we take action – all these things are making me feel extremely lucky, grateful and joyous.

This week, on the same day as thousands of school kids took to the streets across the world, striking in protest for the climate cause, I went to the Magistrates’ Court where I pleaded ‘not guilty’. The magistrate looked slightly bewildered by this and informed me that if I did plead guilty the fine would only be £85, whereas by pleading not guilty, I risk a significantly higher fine, as well as court costs.

I believe there is a strong ethical and moral argument that my actions were based on necessity and that I was acting on my conscience. Whilst I know very little about the law I do know if someone’s house were on fire, to smash a window and save a life would not be a prosecutable action.

Of course, I still expect to be found guilty at the trial in January.

“It’s interesting and important to note that the people who are most effective are often the least attached to the effectiveness of their actions. Being detached from the outcome, and in love with the principles and the process, can help mitigate against burn-out. People make decisions about life like this based on traditional virtue ethics, and it sounds old fashioned, but these include things like duty, honour, tradition and glory. We work best when we know we are doing the right thing, and to be liberated from a system that has compromised your morality your entire life changes everything.”[iii]Roger Hallam.

The reason I thought I should share my story is simple. One statistic inspired me to believe that radical change might be possible:

“As Erica Chenoweth’s historical research reveals, for a peaceful mass movement to succeed, a maximum of 3.5% of the population needs to mobilise. Humans are ultra-social mammals, constantly if subliminally aware of shifting social currents. Once we perceive the status quo has changed, we flip suddenly from support for one state of being to support for another. When a committed and vocal 3.5% unites behind the demand for a new system, the social avalanche that follows becomes irresistible. Giving up before we have reached this threshold is worse than despair: it is defeatism.”[iv]

So, if even one person reading this feels inspired to get involved with XR, then this piece has served its purpose.

Extinction Rebellion are planning to peacefully disrupt Westminster from October 7thonwards, everyone is welcome, so please come along. You can find out more here.

Here are a couple of videos we watched which inspired me to get involved:

One to make you laugh.

One to make you cry

[iii]Roger Hallam, This is Not a Drill, The Civil Resistance Model, p.104

Made with by Wildheart Media